Last week, some German parents who took their kids out of school early were stopped by police at the airport. The police made reports on students who didn’t have permission to miss school.

Like many places, it is against the law to skip school in Germany. Children over the age of 9 can’t miss classes without permission from the school.

But during busy travel times, some parents take their children out of school early to save money on vacations. People can often save a lot of money on flights and hotels by going at a different time than everyone else.

Last weekend was the beginning of an important holiday period in Germany. People in charge of the schools asked police to check and make sure that students weren’t leaving for vacation before they were allowed to.

Police officers at three German airports looked for families with school-aged children. When they found them, the police pulled the families out of lines to talk with them. They wanted to find out if the parents had permission for the children to be out of school.

These families will have two weeks to show that it was okay for their children to miss school. If they can’t, they may have to pay as much as $1,200 as a fine, or punishment.

Germany is not the only place where parents have to pay fines if their children miss school. Many other countries, and many of the states in the US have similar laws.

The good news is that the families were allowed to go on vacation after they talked to the police. But they might have a big bill waiting when they get back.

In today’s news roundup, Captain Tom, who inspired Britain, has passed away at the age of 100, a company called bluShift has launched a rocket powered by biofuel, and a woman is caught trying to sneak cactuses into New Zealand – by wearing them.

Among the more unusual news stories recently…a famous Dutch painting gets stolen for the third time, Sydney’s new ferries are too tall, London’s Tower Bridge gets stuck open, and a new law could require exercise for German dogs. 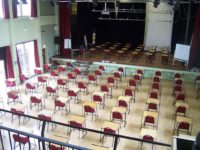 United Kingdom students who want to go to university will now have their A-level test grades based on predictions by their teachers instead of a government formula. The sudden change comes in response to strong protests over the formula’s fairness.