The human backbone, or spine, doesn’t just help us stand up straight. Inside the spine is the spinal cord, which carries important information between the head and the lower part of the body. This information usually moves around as tiny, short bursts of electricity which travel between the brain and the other parts of the body.

The legs and feet can send “sense” information to the brain, saying that they’re hurt, or tired, or hot, for example. And the brain can send signals down to the lower body, perhaps telling the legs to walk, or dance, or sit down.

When someone’s spinal cord is hurt, this important pathway can get damaged. That can mean that information about senses doesn’t go up to the brain from the lower body, and that control signals can’t make it to the lower body from the brain. When that happens, a person is “paralyzed”, and they cannot move their legs.

Special programs at the University of Louisville in Kentucky and the Mayo Clinic in Minnesota are studying similar ways of trying to help people who have been paralyzed.

Kelly Thomas, Jeff Marquis, and Jered Chinnock were all paralyzed. Now, thanks to surgery, a new electric device in their bodies, and lots of practice, they are beginning to take steps on their own.

The secret to this miracle is a small electric device that doctors put in the patient’s back, attaching it to the spine below the damaged area. This device gives out special patterns of very small electric signals.

When the device is turned on, it seems to “wake up” the spine and allow messages from the brain to go down, and to work around that damaged part of the spine.

The process is not easy. The patients needed to learn how to use the new device to control their legs. But with lots of practice, and many weeks of people helping them move their legs and feet, all three patients have learned to walk.

Mr. Marquis and Mr. Chinnock can walk on their own with a frame to help them balance. On his best day, Mr. Chinnock walked about the length of a football field.

Ms. Thomas, who became paralyzed when her truck flipped over in 2014, is now able to walk on her own with a walker. The first time she did this, she said, “it was like watching fireworks, but from the inside.”

The process does not work for everyone. Two other patients did not have the same success.

The scientists point out that this is not yet a real-life solution for paralyzed people. There are still many problems to be solved. For example, none of the patients can walk until the device is turned on by remote control. And all of the patients still need some support when they’re walking.

Still, it is a big step in the right direction.

Companies and scientists around the world are racing to create vaccines to help protect people against the new coronavirus, SARS-CoV-2. Because the coronavirus is so serious, the process is happening much more quickly than normal.

On Monday, about two weeks earlier than planned, New Zealand declared that it was free from the coronavirus. The country has moved to Level 1 in its coronavirus alert system, returning life in New Zealand to nearly normal.

Using Apps to Track the Spread of the Coronavirus 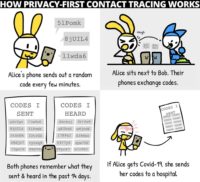 Governments and businesses worldwide are creating smartphone apps to help track the spread of the new coronavirus. The apps could be an important part of easing up on lockdowns, but they are also causing some worries.

Around the world, the coronavirus is presenting massive challenges – so huge that governments are having a hard time keeping up. Seeing the need, ordinary citizens are volunteering – pitching in and doing what they can to help.