The two men who claim to be president in Venezuela have different explanations for the problem. Nicolás Maduro, who has been president since 2013, blames the US for the power failures. Juan Guaidó, who declared himself president in January, blames Mr. Maduro’s government for not taking care of the electrical system.

Venezuela, already suffering, has been hit hard by a huge power outage. Most of the country has been without electricity for the last four days. The news group AFP posted these pictures on the internet.

#UPDATE Most of Venezuela was plunged into darkness on Thursday evening as a blackout served up more misery for people enduring an economic crisis that has fueled a potent challenge to President Nicolas Maduro's rule https://t.co/mjhs4SPkDR pic.twitter.com/T5cCyOoj4m

Mr. Maduro did not offer any proof of his idea that the US caused the electrical problems. For years, there have been reports that the government has not been keeping the electrical system in good shape. It is common for there to be blackouts (when the electricity goes out) which last hours.

But this blackout has hit almost the whole country and has lasted for four days. The exact details are not clear, but it appears that there was a fire in the main station that creates Venezuela’s power. That failure caused other power station failures. So far, electrical workers have been unable to restart the power.

Life in Venezuela was already hard. Once rich because of its oil, Venezuela has become very poor. Venezuela’s money is nearly worthless. There is not enough food or medicine in the country. Over 3 million people have left the country to find better living conditions.

Now, without electricity, the situation has become dangerous. The food shortages, which were very serious, have become even worse, since food that was stored in refrigerators has spoiled. In many places, there is no drinking water because there is no electricity to pump the water. Patients in hospitals without electricity are suffering, and some of them, especially those who depend on machines, are dying.

Many of the people who left the country were the youngest and strongest. Often, those people were hoping to send help back to their families in Venezuela. Now the strongest people are not around to help as the country struggles without electricity.

Behind the electrical problems, there is another, equally important, power struggle. Since January, Mr. Maduro and Mr. Guaidó have been trying to gain control of the country. Mr. Guaidó is popular and has encouraged many protests which have put great pressure on Mr. Maduro.

But Mr. Maduro controls the military (groups like the army and navy). Mr. Guaido hopes the military will switch sides and support him. So far, only a few members have changed sides.

The struggle between the two men and the countries that support them has left the Venezuelan people trapped in the middle.

Venezuela: A Tale of Two Presidents

At the moment, two different men say they are the president of Venezuela. The confusing situation is changing quickly as thousands of Venezuelans protest to remove longtime leader Nicolás Maduro. 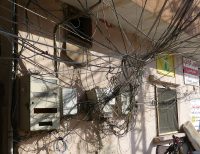 Lebanon suffered a nation-wide blackout on Saturday after the country’s two largest power plants ran out of fuel. On Sunday, the electricity was restored temporarily after the army brought in emergency fuel.