Coronavirus-Limited Hajj Coming to an End

Every year, Muslims from around the world travel to Mecca, Saudi Arabia to complete the hajj. The hajj is a special religious trip that every Muslim person is supposed to make once in their lifetime. It’s one of the most important parts of the Islamic religion.

The timing for the hajj changes every year. This year it started on July 29 and ends today.

Saudi Arabia has worked hard to protect its religious locations and make sure Muslims from around the world can visit. Usually, over 2.5 million people take part in the hajj. In the 90 years since Saudi Arabia was formed, it has never canceled the hajj.

This year, because of the coronavirus,  Saudi Arabia decided not to allow visitors from outside the country. Instead, the country has limited the hajj to a few thousand Muslims already in the country.

The news came as a serious disappointment to many, who had saved all of their lives to make the trip. Instead, Muslims around the world are celebrating Eid al-Adha, one of the holiest Islamic holidays, at home.

But Saudi Arabia has one of the most serious outbreaks of coronavirus in the region, with over 275,000 cases reported.

Large crowds are usually the biggest danger of the hajj. This year, it’s the coronavirus. Saudi Arabia has made special rules to make sure everyone stays safe.

Saudi Arabia has made special rules to make sure everyone stays safe during the hajj this year. The kingdom is tightly controlling everything about the hajj. Above, cleaning around the Kaaba, where social distancing lines have been marked.

Only healthy people between the ages of 20 and 50 were allowed to take part this year. The country is paying for all the costs of the people making the hajj. By tightly controlling where they eat and sleep, and how they travel, the kingdom hopes to make sure the virus does not spread.

The country says that there have been no cases of coronavirus among the people making the hajj.

Stonehenge is an ancient structure in Wiltshire, England, built out of earth and decorated with massive stones. Stonehenge was built in stages for over 1,500 years. The oldest parts are more than 5,000 years old.

Scientists don’t know exactly who built Stonehenge or why. It could have been a special area for burying people. Based on the way it lines up with the Sun’s position, it may have also worked like a calendar.

Stonehenge is most famous for its ring of huge, standing stones, known as sarsens (a kind of sandstone). Until recently, scientists have been uncertain where these stones came from. Now they have the answer.

The sarsens clearly matched stones found in the West Woods, about 16 miles (25 kilometers) away from Stonehenge. It’s still not clear how ancient people moved the sarsens, which are up to 30 feet (9 meters) high and weigh as much as 44,000 pounds (20,000 kilograms). 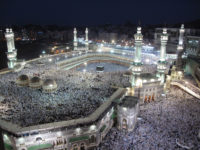 Over the last five days, more than two million people have completed the hajj – the trip to Mecca that every Muslim person is supposed to do once in their lifetime.