A monarchy is a system of government where a monarch (a king or queen) is the “head of state” – the leader of the country. The monarch may not actually have much power, even though they are the head of state. Only in an “absolute monarchy” can the leader make the laws.

In a monarchy, the position of leader is usually passed down in a family. A son or daughter might become the monarch when the person who is king or queen dies. Sometimes a monarch can be elected.

Most monarchs today do not have much power. Many countries have a “constitutional monarchy”, where the monarch has a few special powers, but the job of making laws is left to the government. Spain, the Netherlands, and the United Kingdom are examples of this system. Sometimes monarchs have no special powers, but they are an important part of the country’s history and culture. Japan is an example of a monarchy like this.

When a monarch has the power to make laws, it is called an “absolute monarchy”. Saudi Arabia, Qatar, and eSwatini (Swaziland) have absolute monarchies.

Rishi Sunak will be the next prime minister of the United Kingdom. He replaces Prime Minister Liz Truss, who’s resigning. Mr. Sunak was the only person left in the race after the other candidates dropped out. He’ll be the first person of color to lead the UK. 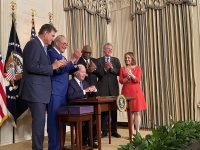