A Chinese space station may come back down to earth soon, possibly on Sunday. Scientists are not sure where it might hit. The station might also burn up before it hits the ground.

In 2011, China sent its first space station, Tiangong-1, into space. China was using Tiangong-1 to test ideas about space stations. They wanted to learn how to make them better and bigger. At first, China only planned to use the station for two years, but they were able to keep using it for about five years.

China was planning on bringing Tiangong-1 down into the ocean so there was no danger to people. But China lost contact with the station in 2016, so they can’t control it. The space station has been falling closer to earth. On Monday Tiangong-1 was about 130 miles away from earth. It was dropping more than a mile a day and falling faster and faster.

Scientists say it is not likely that anyone will be hurt by pieces of the station. Most of the ship will burn up before it hits earth. China has said that all of the ship will burn up. Larger ships have fallen without anyone being hurt. In 1979, for example, pieces of Skylab, the first space station from the US, fell in Australia without causing problems. Skylab was almost ten times heavier than Tiangong-1.

Tiangong-1 landed in the South Pacific Ocean on April 2, 2018 with no harm to humans. The general area where the space station crashed is about 540 miles from Samoa and about 1,000 miles from Tahiti.

The city of Xi’an, China – home to 13 million people – has been under a strict lockdown for two weeks, with some people unable to leave home even to shop for food. The extreme measures show how far China’s government is willing to push to reach “Zero Covid”.

In today’s news roundup, Olaf Scholz becomes the chancellor of Germany, the United States and several other countries send a message to China by refusing to send government representatives to the winter Olympics, and Antarctica gets a rare total solar eclipse. 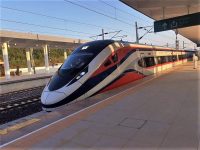