The government of China has a big problem with Winnie the Pooh. Why? Some people think that Pooh looks like President Xi Jinping, and they’re using the bear to make fun of the president.

The Chinese government has strong control over the media. “Media” means the different ways that people can get news. Media usually includes things like radio, TV, newspapers, and the Internet.

China turns off television channels when they report on things that the government does not want them to report on. The CNN channel goes black in China when CNN reports on something that China doesn’t want its people to learn about.

On the Internet, China blocks information by making it impossible to search for certain words. People will not get any results if they search the Internet for things that the government doesn’t want them to know about.

The Chinese government removes messages they do not like from social media.

The Chinese government removes messages they don’t like from social media.
For example, pictures comparing President Xi to Winnie the Pooh.

Winnie the Pooh has been censored from Chinese social media platform #Weibo because of a passing resemblance to a certain leader pic.twitter.com/qykXHUlBMk

Often, China does not even allow people to put things on the Internet if they use certain words. At one point, people in China were not allowed to use the word “disagree” or “control” on the Internet.

In recent years, Internet users in China have not been allowed to use pictures of Winnie the Pooh or even talk about him using his Chinese name. That’s because people have been using Pooh to make fun of Mr. Xi since 2013.

Capping off a ludicrous day in diplomacy- Abe as despondent Eeyore, Xi as sanctimonious Pooh trending on Weibo #APEC pic.twitter.com/bxtX2Z6M4N

The comic John Oliver did a long story on Xi Jinping earlier this year. His report talked about Winnie the Pooh. After that, the company that owns Mr. Oliver’s show, HBO, had their website blocked in China.

The Chinese government even controls what movies Chinese people can see. In 2017, Chinese theaters could only show about 44 movies that had been made outside of China.

Joking about Winnie the Pooh may make it seem like China’s control of information is not serious. But it is very serious. When a government can control everything that its people can see and hear, it makes it very easy for the government to secretly do things that it should not do. 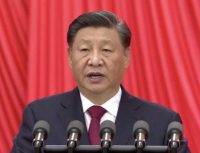