Over 10,000 teachers from 179 different countries took part in the contest this year. Mr. Tabichi was chosen from among the ten final teachers. The award was given out on Saturday in Dubai, United Arab Emirates.

Mr. Tabichi works at Keriko Secondary School in Pwani Village, Kenya. The school is in a poor area that faces many challenges. The classes are huge – there are about 58 students for every teacher.

The school also does not have many teaching materials that are common in other schools. There is only one computer at the school, and the internet connection is not very good.

Still, Mr. Tabichi has been able to lead his students to great results. He has tried to build on things that the students are already interested in and good at. In the last three years, the number of students has doubled, and yet there are far fewer behavior problems than there were before Mr. Tabichi started.

But Mr. Tabichi’s work doesn’t end when the school day is over. He also works after school and on weekends to give students extra help.

He is also working to help the families of his students and the other people in the area. Once every three or four years, the area is hit by a serious drought – a long time without rain. Mr. Tabichi has worked to teach the local people how to grow plants that can survive even when there isn’t much rain.

The Keriko Secondary School is in an area of Kenya where there has been a lot of fighting and violence. Mr. Tabichi has tried to focus on these problems by creating a Peace Club to help people find ways to get along.

Mr. Tabichi, who comes from a family of teachers, is a religious man. He is part of a group called the “Franciscan Brothers”, who believe in living simply and helping those around them. The group giving the Global Teacher Prize reports that Mr. Tabichi gives 80% of the money he earns to help others.

The Global Teacher Prize was started five years ago by Sunny Varkey, a man from the United Arab Emirates. Mr. Varkey is in charge of a company that runs about 70 schools in 18 different countries around the world.

Mr. Tabichi said that if he won the contest, he would like to use the money to improve his school. He wants to help build up the science program. He also hopes to buy more computers and get the school a better internet connection.

Mr. Tabichi says that to be a great teacher, you have to be very creative. “You have to do more and talk less,” he says. 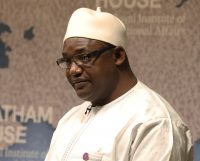 Adama Barrow has been re-elected as president of Gambia. Though two other candidates say they’ll challenge the results, people watching the voting say the election was fair. It was the country’s first election without long-time dictator Yahya Jammeh.

On Friday, the World Health Organization released information on a new version of the virus that causes Covid-19. The new variant, which has been named “Omicron”, was first spotted in South Africa. Countries around the world are now racing to prepare for Omicron.