Queen Elizabeth II passed away on Thursday at age 96. She’s reported to have died peacefully at Balmoral Castle in Scotland. The queen’s oldest son, Prince Charles, has now become the king.

Elizabeth became the queen of England in 1952 at the age of 25. No other English monarch has ruled as long as Queen Elizabeth. During her time on the throne, the United Kingdom had 15 prime ministers, going all the way back to Winston Churchill.

The queen was much loved by the British people for remaining steady through difficult times. And as a symbol of the country, she was famous around the world.

In recent months it became more and more difficult for the queen to get around. She canceled some parts of her normally busy schedule of public events. On Tuesday, she appointed Liz Truss as the UK’s new prime minister. But on Wednesday, it was reported that doctors were concerned for her health.

Flags across the country are being lowered halfway to show respect. Official ceremonies to remember the queen will be announced soon.

In 2020, 78% of Chile’s voters voted to create a new constitution. The country’s current constitution was created under General Augusto Pinochet. Mr. Pinochet was a brutal dictator who ruled from 1973 until 1990.

Over the last two years, a team of people from many different groups in Chile created the new constitution. The new constitution promised Chile’s people over 100 rights – more than any other country in the world.

The constitution guaranteed many things, including education, health care, food, housing, and internet. It promised to support workers, protect the environment, and have equal numbers of men and women in government

On Sunday, Chile’s voters had a chance to approve or reject a new constitution. It promised Chile’s people over 100 rights, including education, health care, food, housing, and internet. The constitution was rejected when 62% of the people voted against it.

On Sunday, Chile’s voters had a chance to approve or reject the new document. About 62% of the people voted against it. Some people were worried about how much the new constitution would cost. Others didn’t like that it gave tribes of indigenous people the right to set up their own governments.

Since the vote, many young people have been protesting because the constitution was rejected. The vote has weakened the president, who supported the constitution. Many people still hope the country can come up with a new, improved constitution.

On September 1, the Royal Australian Mint released a special coin designed to celebrate the 75 years the Australian Signals Directorate (ASD) has existed. The ASD is an Australian government agency responsible for handling secret messages and breaking codes.

To celebrate the ASD’s history, the coin has four levels of codes on it. Each level is more difficult than the previous level. The ASD’s leader, Rachel Noble, suggested that people who could crack those codes might have the skills needed to work at the agency.

A little more than an hour after the coin was released, a correct solution to the four codes was reported to the ASD website. The person who had cracked the codes was a 14-year-old boy from Tasmania. Ms. Noble called the boy’s success “unbelievable” and said that the ASD was hoping to meet the boy soon.

Did You Know…?
When Ms. Noble reported on the boy’s success, she also revealed that there was a fifth level of code on the coin that no one had cracked yet.

In today’s news roundup, Australia and the Philippines re-open to tourists after nearly two years, Queen Elizabeth II of England celebrates 70 years on the throne, and a man in Indonesia rescues a crocodile that has had a tire stuck on its neck for six years. 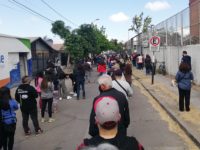 On Sunday, voters in Chile turned out in great numbers to decide whether the country should create a new constitution. Over 78% of the voters said, “Yes” – a result that led to celebrations in the streets.

This week, the American Library Association and several other groups are marking “Banned Books Week”. The goal is to make people aware of efforts to restrict certain books, and to work to protect the freedom to share ideas – even unpopular ideas.