The comb was found in the ruins of a city called Tel Lachish. Tel Lachish was an important city to an ancient people known as the Canaanites. The Canaanites lived in the area we now call the Middle East until roughly 2,000 years ago.

The Canaanites invented their own alphabet. Some earlier groups of people had systems of writing. But their systems used symbols that stood for ideas, instead of letters that stood for sounds. The Canaanite alphabet is the world’s first alphabet, and it led to our modern alphabets.

The comb was one of several objects found in 2016. At the time, no one noticed the tiny writing on the side. But in 2021, a researcher at Hebrew University of Jerusalem realized the small carved marks were writing.

The writing was in the Canaanite alphabet. It’s unusual to have a full sentence of Canaanite writing. Most writing from the time has completely disappeared. The few items that have been found usually only have a few letters on them. The comb had 17 letters making up seven words.

It wasn’t easy to figure out what the writing said. Because the comb was so small, the writing is split over three lines. The comb was spun around between the first and second line. The third line has just a single letter that didn’t fit on the line above.

So what does the comb say? “May this tusk root out the lice of the hair and the beard.”

“This is something very human,” says Yosef Garfinkel, one of the researchers. “You’re immediately connected to this person who had this comb.”

Lice are a common problem for humans, even today. Lice are small insects that live on human heads and feed off of their blood. They’re known for causing itchy heads. They’re also known for being hard to get rid of. Lice attach their eggs to the hair of the person they’re on. One important part of removing lice is to use a comb with small teeth to comb them out.

The teeth on the ancient comb have broken off, but the bottoms of the teeth can still be seen. On one side, the comb had six large teeth for untangling hair. The other side had 14 much thinner teeth for removing lice. Using a microscope, the scientists actually found some bits of ancient lice on the comb.

The comb is made of ivory from an elephant’s tusk. Ivory was a very special material at that time and place, since there were no elephants in the area. That makes it likely that the comb’s owner was a fairly rich person.

The comb and its writing are considered extremely important. Dr. Garfinkel says the comb proves that the alphabet was used in daily activities roughly 3,700 years ago. “This is a landmark in the history of the human ability to write,” he says.

Two teens helping out on an archeological dig in Israel wound up striking gold – literally. The teenagers revealed a clay pot holding hundreds of gold coins over 1,100 years old. 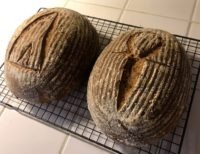