You may have heard that the World Cup-winning US women’s soccer (football) team is suing US Soccer over unequal pay. Though that’s the most famous case, other female soccer players around the world are also fighting for equality.

The biggest win for women recently has been in Australia, where the FFA (Football Federation Australia) has just agreed to pay female players exactly the same as male players.

That will make a huge difference for female players, bringing their pay up from around $45,000 US to about $69,000 US. The women will also be given all of the other help that men get. It’s fairly unusual for female soccer teams to get this close to equality.

In late October, female soccer players in Spain announced that they would be going on strike on November 16. The women wanted better pay and to be promised more hours per week. For many athletes, the pay was so low they simply could not play soccer for a living.

Earlier this week, Spain’s football federation, the group that oversees professional soccer in Spain, announced that it was offering $1.3 million to help raise the pay for the top 18 players on each team. The lowest amount that top players will now be paid is $17,800, and that is expected to go up to $19,000 soon.

Though that’s still far from the amount that most male players in Spain make, the strike has been called off.

In Italy, female players face an even more difficult problem. By law, they are thought of as amateurs (not professionals). That puts a limit on the amount of money that they can earn – $33,000.

It is currently against the law for them to earn any more. Many people want to change the law, but that will be a slow process.

Many female teams have had success when they were supported by the clubs behind well-known male teams. In places like the UK, France, and Spain, clubs like Manchester United, Paris Saint Germain, and Barcelona have worked hard to build up their female teams.

In many ways, improving conditions for female players and getting bigger crowds are both part of the same cycle. As more money is put into the women’s teams, the quality of the teams improve. Successful teams draw larger crowds, which earn more money.

But there is still a large difference between improving the conditions for women’s soccer and making female soccer players equal with male players.

For example, even with the new deal in Australia, the Australian women will still be left far behind the men. Why? Because the FFA doesn’t control prize money. And the prize money is still tilted very much in favor of men.

The trial for the US team’s lawsuit against US Soccer is planned for next May.

The United States won the 2019 Women’s World Cup on Sunday, beating the Netherlands 2-0. It was a hard fought match that led to the US winning a record-setting four World Cup soccer contests.

The FIFA Women’s World Cup begins today. Teams from 24 countries will meet in stadiums across France to decide which country has the best women’s soccer team in the world. 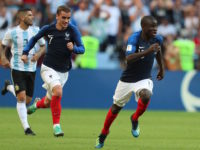