The United States Senate  has begun the impeachment trial of President Donald Trump. After an investigation in the House of Representatives, which is controlled by Democrats, the House brought two “articles of impeachment”, or charges, against Mr. Trump: “abuse of power” and “obstruction of Congress“.

The charges are based on actions Mr. Trump took to force Ukraine to investigate one of his political rivals, Joe Biden.

On Wednesday, the House voted to send the articles of impeachment to the Senate. Seven House members will manage the impeachment.

Now the Senate will hold a trial. On Thursday, John Roberts, chief justice of the Supreme Court, was sworn in to hear the trial. Justice Roberts then swore in the Senators.

When they were sworn in, the senators promised to be impartial. That will be a challenge since many senators have already said they won’t be impartial. The Senate’s leadership, which is controlled by Republicans, has been working closely with the White House on a plan for the trial.

One big question is whether witnesses will be called to speak. Mr. Trump and most Republicans  don’t want witnesses to share what they know. Democrats  say witnesses are an important part of the process. Some Republicans say they may vote to include witnesses in the trial.

The trial will begin on Tuesday.

Four-time world chess champion Magnus Carlsen set a new record on Tuesday when he completed 111 chess matches without being beaten. The old record of 110 games was set in 2005 by Russian Sergei Tiviakov.

The 29-year-old Norwegian player set the record when he drew (tied) against Jorden van Foreest in the fourth round of the Tata Steel Chess contest in the Netherlands.

Mr. Carlsen drew again in rounds five and six, bringing his unbeaten streak to 113. Though the draws extend his streak, they aren’t putting Mr. Carlsen in a good position to win the contest. Mr. Carlsen, who is currently ranked number 1 in the world, is only in fifth place in the contest.

In 2018, Japanese billionaire Yusaku Maezawa became the first customer for Starship – a spacecraft being developed by SpaceX which will take people who pay into space. Starship is still being developed and probably won’t fly until 2022 or later.

Now Mr. Maezawa has begun a search to find a woman to join him on that trip around the moon. Mr. Maezawa, who started Japan’s largest online store, Zozotown , announced on the internet that he is looking for a “life partner” to join him on his trip. The search is being filmed for a reality TV show called “Full Moon Lovers”.

Friday was the last day to apply, but the search is expected to last a few months. After reviewing the applications, Mr. Maezawa plans to go on several “special dates” before making a final decision by the end of March.

On his website, Mr. Maezawa writes, “With that future partner of mine, I want to shout our love and world peace from outer space.”

Yesterday, after a long day of speeches from different points of view by Democrats and Republicans, the United States House of Representatives voted to impeach US President Donald Trump.

Last week, the US House of Representatives began a public investigation into actions by US President Donald Trump. The investigation will decide if Mr. Trump should be accused of crimes that could result in him being removed as president.

US House to Look into Trump’s Ukraine Request

On Tuesday, the US House of Representatives began officially looking into whether Congress should accuse US President Donald Trump of one or more crimes in a process called “impeachment”. 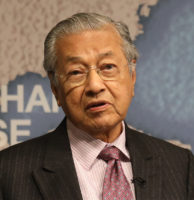 On Monday, Malaysia was shocked when Prime Minister Mahathir Mohamad stepped down suddenly. It’s not yet clear if Mr. Mahathir is really quitting or if he’s stepping down in order to form a new government.

In today’s news roundup, Senator Bernie Sanders wins Nevada, Russia is reported to be trying to help Donald Trump and Mr. Sanders in the election, and thieves in Hong Kong steal an unusual item – toilet paper.

In today’s news roundup, China begins to count its cases of COVID-19 (the coronavirus disease) differently, NASA fixes the Voyager 2 from billions of miles away, and a 101-year-old man is told that his parents need to confirm his identity.

Election Surprises Around the World

Election results have been announced this week in several places around the world with some surprising results. Today, NFK looks at how things turned out in New Hampshire, Ireland, and Delhi.

Last Thursday, American astronaut Christina Koch arrived back on Earth after 328 days in space. That’s the longest spaceflight ever made by a woman, and just one of the many things Ms. Koch achieved in space.