On Monday, Malaysia was shocked when Prime Minister Mahathir Mohamad stepped down suddenly. It’s not yet clear if Mr. Mahathir is really quitting or if he’s stepping down in order to form a new government.

Mr. Mahathir, 94, returned to power in 2018 by joining his political party,  Bersatu, with several other political parties in a “coalition”. Called “Pakatan Harapan” (the Alliance of Hope), the coalition became the first political group to defeat the political party UMNO (United Malays National Organization), which had controlled Malaysia since 1957.

Mr. Mahathir led Malaysia for 22 years from 1981 to 2003 as part of UMNO. Malaysia grew and became more wealthy and more modern under Mr. Mahathir. Life improved for many Malaysians. But Mr. Mahathir was a tough leader and fought hard to stay in charge. He punished people who got in his way.

Anwar Ibrahim, who worked with Mr. Mahathir in his early years as prime minister, was one of those who was punished. Mr. Mahathir sent Mr. Anwar to jail because he thought he was getting too powerful. Mr. Anwar got out of jail, but later he was sent to jail again. Many people think he shouldn’t have gone to jail either time.

Mr. Anwar was released from jail, but Mr. Mahathir has not yet made any move to let Mr. Anwar take over.

Now, less than two years after he became prime minister, Mr. Mahathir has sent a letter to Malaysia’s king saying that he is stepping down. But because of the way he stepped down, many people don’t believe he’s quitting.

It’s hard to tell if Mr. Mahathir plans to make way for Mr. Anwar or if he is trying to keep him from coming to power. Many people believe there is still a lot of tension between the two men.

Adding to the confusion, Mr. Mahathir later announced that he was leaving his own party. Many people believe Mr. Mahathir has enough political support to continue as prime minister anyway.

It’s not clear if there is enough political support for Mr. Anwar to become prime minister. Other political parties are interested in trying to remove both Mr. Mahathir and Mr. Anwar.

For now, the king, Sultan Muhammad V, has asked Mr. Mahathir to continue acting as prime minister until a new government is formed.

Last Saturday, Malaysia’s king chose Muhyiddin Yassin as the country’s new prime minister, surprising Malaysians and bringing an end to a week of confusion over who would lead the country.

The news came as a shock to Mr. Mahathir, who joined with Mr. Muhyiddin starting in 2016 to create the political party  Bersatu, which helped remove the old government in 2018.

It was Mr. Muhyiddin who triggered the current situation by pulling Bersatu out of the Pakatan Harapan coalition.

Malaysia’s king, Sultan Muhammad V, had the responsibility of picking the person with the best chance of forming a stable government. Mr. Muhyiddin says that he has the support of over half of the members of Parliament.

But Mr. Mahathir also said that he had the backing of 114 members of Parliament – well over half of the 222 members.

Mr. Mahathir says he has written a letter to the king, asking him to change his mind. He is also calling for an emergency meeting in parliament. Mr. Mahathir is worried that some of his supporters may change their minds if they are offered positions in the new government.

Mr. Muhyiddin was sworn in by the king on Sunday and began working as prime minister on Monday.

The coalition of political parties supporting Mr. Muhyiddin includes the UMNO – a political party involved in a huge corruption problem which cost Malaysia billions of dollars.

Some people worry that the new government may not treat Malaysians from Chinese or Indian backgrounds fairly. Mr. Muhyiddin doesn’t agree. “I am a prime minister for all Malaysians,” he said. 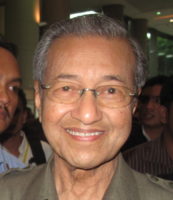 92-year-old Mahathir Mohamad is the new prime minister of Malaysia. The story of his surprise re-election is unusual in many ways.