Coronavirus Cancels Sports Around the World

COVID-19, the new coronavirus,  has caused cancellations of sports events all over the world , disappointing athletes and fans. The main reason is to avoid the crowds that the games attract, but some players have also gotten the disease.

In the US, the NBA has suspended all games. The news came on Wednesday after a player for the Utah Jazz was found to have COVID-19. The NBA hasn’t made any decisions about when games might start up again. All FIBA games have also been suspended.

The NCAA also canceled their popular college basketball tournament, often called “March Madness”. At first the organization planned to play the games without crowds, but soon decided to cancel the tournament completely.

The NCAA also canceled all other winter and spring sports championships. That’s about 20 sports in all, including baseball, softball, lacrosse, hockey, track and field, swimming, diving, and wrestling.

The NHL said on Thursday that it was putting its hockey season on pause. One of the reasons given was that the NHL and the NBA work in many of the same places and share locker rooms.

All of the major European soccer (football) leagues have been suspended, including the Champions League and the Premier League. Italy’s Serie A, Spain’s La Liga, France’s Ligue 1, and Germany’s Bundesliga have all put their seasons on pause for now. In the US, MLS has suspended all of its soccer games for 30 days.

Baseball fans will have to wait for their season to start. MLB said that it was suspending spring training and delaying the beginning of the season by at least two weeks. Japan’s professional baseball league has also been postponed.

Golf fans will miss out on the PGA Tour and the Masters, which have been canceled.

Around the world, many other sports events have also been canceled or suspended, including tennis, swimming, gymnastics, ice skating, boxing, cycling, and skiing, among others.

The cancellations will affect TV networks, which will now have to find other programs to fill all that empty time on the air. That’s especially true for sports-focused stations like ESPN.

For the millions of sports fans around the world who are staying at home because of the coronavirus, it means they won’t be able to pass the time watching sports.

The 2020 Olympics are scheduled to be held in Japan this summer, but many people wonder if this will still be possible. Some of the events that allow athletes to qualify for the Olympics have been delayed.

Recently, the Olympic torch was lit in Greece. Plans called for athletes to run through Greece with the torch. These plans were canceled in order to prevent crowds from gathering to watch the torch as it passed.

Japan’s government has said that it still plans to hold the Olympics as planned.

NewsForKids.net also has these COVID-19 resources:
• Overview of COVID-19
• Collection of our articles on COVID-19
• Regular, detailed COVID-19 updates

Why It’s Important to Slow the Coronavirus

Around the world, governments are limiting travel, canceling public events, and closing schools, hoping to slow the spread of COVID-19, the new coronavirus. Though extreme steps like these may seem scary, the goal is to keep people safe. 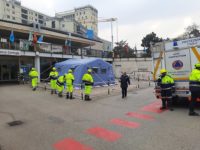 The new coronavirus disease continues to spread around the world. As the number of new cases in China is dropping, the number of cases in other countries is rising, sometimes quite suddenly.

After weeks of a very difficult Covid-19 lockdown, some people in Shanghai, China have been allowed to leave their homes. But the government says millions more must remain at home. The outbreak is making people question China’s “zero-Covid” program.