After three elections and a year of political confusion, Israel will finally have a new government. Israel’s prime minister Benjamin Netanyahu and his main opponent, Benny Gantz, have agreed to form a “unity government” together.

Mr. Netanyahu and his Likud party have led Israel for over 10 years. Mr. Gantz, who was an army leader, is the head of the Blue and White party, which has been working hard to remove Mr. Netanyahu from power.

Under the agreement, Mr. Netanyahu will lead the country as prime minister until October of 2021. Then Mr. Gantz will take over for the rest of the three-year term. The agreement has many special rules designed to make sure both sides stick to the deal and don’t try to change things later on.

Many people see the agreement as weakening Mr. Gantz and giving Mr. Netanyahu a surprising boost at a time when he seemed almost certain to be defeated.

Some people believe Mr. Netanyahu is using the coronavirus crisis as a way of remaining in power and trying to avoid being punished for the crimes he’s charged with.

The agreement between Mr. Netanyahu and Mr. Gantz came at the end of an extremely long battle for the leadership of the country. The two men were under great pressure to reach a deal because of important concerns about the coronavirus crisis.

The struggle to create a new government in Israel has been going on for a year. There have been three elections, and each election ended with no party having enough seats in the Knesset, Israel’s parliament, to form a government.

After the earlier elections, the two sides had discussed joining their parties together to form a “unity government”, but Mr. Gantz always said that he would never create a government with Mr. Netanyahu as the leader.

But in March, as the coronavirus emergency grew, Mr. Gantz said he would consider working with Mr. Netanyahu. When Mr. Gantz accepted Mr. Netanyahu’s support to become the speaker of the Knesset, the Blue and White party quickly broke up. Its members felt like Mr. Gantz had gone against his word.

The two sides still hadn’t reached an agreement when the time for forming a government ran out last week. But they were given extra time when they announced that they were close to a deal.

The two men announced the deal on Monday. Mr. Netanyahu called it a “national emergency government”. Mr. Gantz said, “We prevented a fourth election. We will maintain democracy. We will fight corona and take care of all the citizens of Israel.”

It could take several days for the deal to be completely worked out by the Knesset, but the plan is expected to pass. 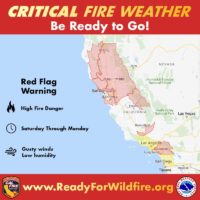 In today’s news roundup, California struggles to control wildfires in strong winds, Israel’s Benny Gantz gets a chance to form a government after Prime Minister Benjamin Netanyahu fails, and a famous Danish lighthouse is rolled to a new spot.

Election Do-Overs Around the World

In this article, NewsForKids.net takes a look at recent elections in Tunisia, Israel, and Spain that were so close that more elections were needed.

Recent elections in Israel and Finland were both very close, but had different results. In Israel it looks like the current government will carry on, but for Finland’s Social Democrats, it was the first win in many years.