The experiment was led by researchers at the Ben-Gurion University of the Negev in Israel. They wanted to see if goldfish’s ability to navigate (find their way) depends on their natural environment, or if they could navigate even under very unusual conditions. They learned that goldfish can find their way, even on dry land.

To test the goldfish, the researchers created a special robotic car that could drive forward, backward, and from side to side. The scientists called the car a “Fish Operated Vehicle” (FOV).

A goldfish was placed inside a water tank on the FOV. Using a special system, the car tracked where the goldfish was and what direction it was swimming. The FOV would then automatically move in the same direction.

The scientists worked with six different goldfish. They tested them by placing the car in a small room with a pink target on one side. The fish were rewarded with a food pellet when the car touched the target.

At first, it took the fish about a half an hour to drive to the target. But by the end of the experiment, they were able to complete the same challenge in less than a minute.

Shachar Givon, one of the researchers said, “As anyone who has tried to learn how to ride a bike or to drive a car knows, it is challenging at first.”

Not only did the goldfish show that they could drive to the target, they weren’t fooled by fake targets of other colors. They were also able to get themselves free when the car was stuck next to a wall.

Though the experiment showed that the fish were able to navigate to a target, it’s not likely that the fish knew they were controlling a car. They may not have even realized they were moving on land. The researchers say that in the future it may be possible to change the FOV to test these ideas.

Though it may seem unusual, this isn’t the first time a fish has driven a car. In 2014, a design studio in the Netherlands created a similar car, which was guided by the movements of a goldfish swimming in a tank on the car. But that project wasn’t an experiment, and it wasn’t meant to test the fish.

Did You Know…?
Both dogs and rats have also been trained to drive cars. One recent experiment showed that driving helped rats lower their stress level. 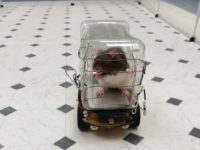 What’s a good way to lower your stress level? Well, if you’re a rat, one possible method is to drive around in a little car in hopes of getting pieces of sweet breakfast cereal.