Tonga is an island nation in the South Pacific ocean, home to about 105,000 people. The volcano, known as Hunga Tonga-Hunga Ha’apai, is located off the coast of Tonga, about 40 miles (65 kilometers) away from the capital, Nuku’alofa.

The volcano first began to erupt on Friday. Even though the volcano was underwater, it sent a column of gas, ash, and stones 12 miles (20 kilometers) into the sky.

Saturday’s eruption was far larger. It’s believed to be the largest in over 20 years. The eruption caused a loud “sonic boom” – an explosive pressure wave – which could be heard even in Alaska, 6,000 miles (10,000 kilometers) away. The volcano triggered a 5.8 magnitude earthquake,  as well as tsunami waves that traveled far and wide.

In Japan, Chile and Australia, people were moved away from low-lying areas along the coast. The waves sunk boats in New Zealand and caused two deaths in Peru. In the US, the National Weather Service warned of possible tsunamis and flooding from California to Alaska.

Scientists weren’t sure exactly what to expect, since normally, tsunamis are caused by earthquakes. In this case, the tsunamis were caused by the volcanic eruption.

The volcano triggered tsunami waves that traveled far and wide. In Japan, Chile and Australia, people were moved away from low-lying areas. In the US, people were warned of possible tsunamis from California to Alaska. Above, big waves in California on Saturday.

It took a while to get reports from Tonga, since the event knocked out internet service in the area. Like most island nations, Tonga gets its internet through a cable that runs deep under the sea. Experts say it’s not yet clear whether the cable was broken during the event or simply lost power.

A four-foot (1.2 meter) wave hit the capital, Nuku’alofa. People in low-lying areas were forced to go to higher ground. There are reports of serious damage in Tonga. Many houses near the shore were flooded, and some were knocked down.

So far, there are no reports of injuries or deaths in Tonga related to the eruption. Because of problems with communication, it may be a while before the damage in the area is fully known.

Currently, the biggest danger is probably from the smoke and ash from the volcano that has covered much of Tonga. The ash makes the air dangerous to breathe and is believed to have polluted many sources of drinking water.

New Zealand and Australia have sent teams to Tonga to help out. Some of the teams will use airplanes to get a better idea of the damage across the island nation. Currently, the large cloud of ash high above Tonga is making it impossible to get a good picture of what’s happening in the area from high in the air. The United States and the World Health Organization are also sending help to Tonga.

Did You Know…?
This isn’t the first time Hunga Tonga-Hunga Ha’apai volcano has erupted. The volcano’s 2015 eruption threw out enough ash and large rocks to create a new island 1.6 miles (2 kilometers) long and .6 miles (1 kilometer) wide (see first picture). Much of that island may now be destroyed.

A massive “raft” of very lightweight rocks called pumice is floating across the South Pacific Ocean. The rocks came from an undersea volcano and are expected to wind up in Australia in seven to 12 months. 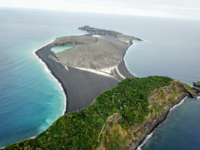 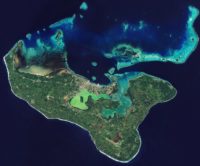 An undersea cable that connects the island nation of Tonga to the internet has broken. As a result, Tongans will be without their main internet connection for several weeks.