Iraq Hit by Series of Sand and Dust Storms

Since mid-April, people across Iraq have been struggling with a series of sand and dust storms. The storms have turned skies orange and caused serious health problems for thousands of people.

On Monday, the latest of these storms hit, closing schools, offices, and airports. The orange sand coated everything outdoors, and dust in the air made it difficult to see. At least 2,000 people went to hospitals across the country, suffering from breathing problems.

Since mid-April, people across Iraq have faced a series of sand and dust storms. The storms have turned skies orange and caused serious health problems for thousands of people. On Monday, the latest of these storms hit, closing schools, offices, and airports.

Many people in Iraq blame the government for not managing the country’s water resources well. The problems are expected to become worse over the summer. There has been very little rain, and temperatures are expected to rise.

US Soccer Reaches Deal to Pay Men and Women Equally

On Wednesday, US Soccer announced an agreement to pay male and female athletes on its national teams equally. The deal brings an end to a six-year struggle for fair pay by US women’s soccer (football) players.

The US women’s soccer team is one of the world’s most successful teams. They have won four World Cups. Despite this success, its athletes were paid far less than athletes on the US men’s team, which has had much less success. Under the new deal, US Soccer’s female athletes will be paid at the same rate as male athletes.

Some people believe the new deal could help change the way female athletes are paid worldwide.

Maud Lewis was a Canadian artist who painted brightly colored scenes on all kinds of surfaces. She was poor for most of her life, and sold her paintings by the side of the road for $2 to $3. Painting wasn’t easy, since she had a condition that made moving painful.

John Kinnear, also an artist, was touched by Ms. Lewis’s work, and sent her boxes of painting supplies to support her. In return, Ms. Lewis sent Mr. Kinnear several paintings.

Mr. Kinnear was friends with Irene and Tony Demas, who owned the restaurant where he ate lunch every day. One day, he offered to trade one of Ms. Lewis’s paintings for some grilled cheese sandwiches. They chose a painting called “Black Truck”.

Over 50 years later, the restaurant owners decided to sell the painting. They’ve retired and hope to travel. But in the years since Maud Lewis died, her paintings have become famous.

Last Saturday, the painting that was once traded for grilled cheese sandwiches was sold at auction for $350,000 Canadian (about US$270,000).

In today’s news roundup, some truckers’ protests have ended while others are just starting, the US women’s national soccer team wins their court case over equal pay, and a 16-year-old chess whiz from India has beaten world chess champion Magnus Carlsen.

In today’s news roundup, Carl Nassib becomes the NFL’s first active player who is openly gay, a panda in a Japanese zoo gives birth to twins, and a David Bowie painting bought in a second-hand store for $4 sells for $89,000. 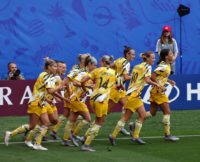 You may have heard that the World Cup-winning US women’s soccer team is suing US Soccer over unequal pay. Though that’s the most famous case, other female soccer players around the world are also fighting for equality.