When Mr. Esterhuizen had his accident in 2011, he was studying to be a pilot. But he had to give that up and focus instead on learning to deal with a world he couldn’t see.

Mr. Esterhuizen is from South Africa. In 2018, he and his wife moved to California in order to take part in a study that offered the possibility of helping him with his vision.

The study was being run by UCLA (University of California, Los Angeles) and a company called Second Sight. The goal of the study was to test an unusual medical product called Orion.

There are three important pieces to Orion. One part looks like a pair of glasses. But the glasses are really for holding a camera on the person’s head. They also send wireless signals. The second part of Orion is a tiny computer that processes the video from the camera.

So that’s where the “sight” comes from. But how does it get to the brain? The third part is a tiny device – an implant – that is inserted directly into the patient’s brain. That’s what’s new and different about Orion.

For years, Second Sight and other companies have been working on ways to get visual information into the brains of blind people. Most of the efforts have focused on connecting to the retina – a layer at the back of the eye that turns light into electrical signals for the brain.

By sending electrical signals to the retina, some visual information can be sent to the brain. So far Second Sight has given about 350 people retinal implants.

But a retinal implant wasn’t possible for Mr. Esterhuizen. That’s why Orion’s direct connection to the brain was especially interesting to him. As Dr. Nader Pouratian, the surgeon who gave Mr. Esterhuizen his implant, said, “With the current system we’re testing, you don’t even need to have eyes for the device to work.”

Mr. Esterhuizen’s vision isn’t “fixed”. He can’t see normally. But he can tell dark from light. He says he sees “little white dots on a black background, like looking up at the stars at night.”

There are six people in the world trying out the Orion. Mr. Esterhuizen is one of two in the US.

“Now I can do things that I couldn’t do before,” Mr. Esterhuizen said. “I can sort the laundry, find my way in lighted hallways without using a cane, and cross the street more safely. It’s making my life much easier.” 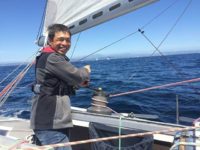