Queen Elizabeth II has approved a surprising plan by Prince Harry and Meghan Markle to “step back” from their positions as “senior royals” so the couple can be more independent.

Prince Harry is the second son of Prince Charles and the grandson of Queen Elizabeth II. He’s sixth in line for the throne of the United Kingdom.  In Britain, the royal family doesn’t have much power, but it’s still important.

In May 2018, Prince Harry married the American actress, Meghan Markle, causing excitement in the UK and around the world. In May 2019, the couple had a baby, Archie.

The Duke and Duchess of Sussex, as the couple are also known, shocked the world last week by announcing that they were “stepping back” from their positions as “senior royals”.

The couple said they hoped to earn their own living, and split their time between England and North America. The couple announced the move on social media  and through a new website.

Being a member of the royal family is a very public position, and both Prince Harry and Ms. Markle have struggled with the attention.

The two are frequently in the newspapers. Though many stories are positive, there has also been negative attention. Some articles have discussed Ms. Markle harshly. Ms. Markle’s mother is black, making her the first member of the royal family who isn’t white.

The couple are suing several of England’s newspapers. One newspaper published one of Ms. Markle’s private letters. Prince Harry has accused other newspapers of listening to his voice mails.

On Monday, the 93-year-old Queen called a special meeting for the members of the royal family. The goal was to figure out how to handle the couple’s plan.

What Prince Harry is suggesting – being sort of a “part-time Prince” – is something that has never been done before, and the Royal family wants to find the best way to handle the situation.

Some of the trickiest parts have to do with money. Part of the royal family’s money comes from UK taxpayers. Though the couple say they’ll give this up, there are many other problems, like how the family will be protected, and who will pay for their travel.

One of the important jobs of senior royals is appearing in public and helping with the many charities the Royal family supports. Though Prince Harry and Ms. Markle say they’ll support the Queen, “stepping back” may mean that much of this work will now fall on other members of the royal family.

The couple now have the Queen’s permission, but there are still many things to be worked out. While these matters are being settled, the couple will spend time in both Canada and the UK.

In 1936, the royal family had an even bigger challenge when King Edward VIII wanted to marry a divorced American woman named Wallis Simpson. The king gave up his throne to marry the woman he loved. 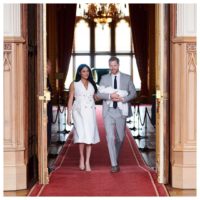 The British royal family has a new member. Early Monday morning, Meghan Markle, the wife of Britain’s Prince Harry, gave birth to a baby boy. The baby is seventh in line for the British throne.

Britain’s Prince Harry married the American actress Meghan Markle on Saturday. Tens of millions of people around the world watched on TV and over the Internet.