Manfred Steiner Gets a Ph.D. In Physics at Age 89

Dr. Manfred Steiner didn’t really need another Ph.D. degree. After all, he already had two. Besides, Dr. Steiner was trained as a doctor, and had been a professor of medicine for years.

But after Dr. Steiner retired, he realized he finally had time to do something he’d always wanted to do – study physics. At first Dr. Steiner just took a few classes, but after a while, he finished enough classes to complete a regular college degree. That’s when he decided to get a Ph.D.

It took him a long time, but in September, at age 89, Dr. Steiner finally earned his physics Ph.D. Dr. Steiner encourages young people who have a dream to “follow that dream. Don’t give up on it.”

Julia “Hurricane” Hawkins set a new world record earlier this November by running the 100 meter dash in just over 62 seconds. If that doesn’t sound like a record to you, keep in mind that Ms. Hawkins is 105 years old. Before this year, there wasn’t even a category for female runners over the age of 104. They had to create one for Ms. Hawkins.

Running isn’t Ms. Hawkins’ main sport – she’s been biking for most of her life. But she took up running a few years ago and set her first world record in 2017.

Encouraging others to be active is a big part of what keeps Ms. Hawkins running. “My message to others,” she says, “Is that you have to stay active if you want to be healthy and happy as you age.”

In early November, M.J. “Sunny” Eberhart became the oldest person to hike the full Appalachian Trail (AT). Mr. Eberhart – known on the Trail as “Nimblewill Nomad” – is 83 years old.

The 2,193 mile (3,530 kilometer) hiking trail through the Appalachian Mountains isn’t easy, even for younger people. Mr. Eberhart had to deal with pain and injuries, but he kept going anyway. “I’ve a got a couple of skid marks on me,” he says, “But I’m okay.”

In early November, M.J. “Sunny” Eberhart became the oldest person to hike the full Appalachian Trail (AT). Mr. Eberhart – known on the Trail as “Nimblewill Nomad” – is 83 years old. The New York Times wrote an article about him and created the post below.

Mr. Eberhart didn’t just hike the whole trail, he hiked several hundred miles from his home in Alabama to the beginning of the Trail. He’s not exactly new to hiking. He’s been hiking extremely long distances since 1993, when he retired as an eye doctor. He’s even written books about his hiking. The first book was called “Ten Million Steps”.

For the last few miles of this hike, Mr. Eberhart was joined by Dale Sanders. Mr. Sanders set the same record when he hiked the AT at age 82. Now, at age 86, he came to celebrate as Mr. Eberhart broke his record.

Mr. Eberhart has been writing about his hike on his website. He ended his final report with this quote: “You are never too old to set another goal or to dream a new dream.”

In today’s news roundup, Ex-President Barack Obama delivers two graduation speeches, several women over the age of 100 recover from the coronavirus, and the United Kingdom gets its first white stork chicks in 600 years.

This 104-Year-Old’s Secret Wish? To Be Arrested. 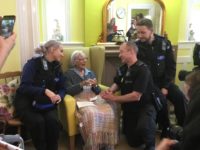 You may think you know what an older person’s greatest wish is, but you might want to double check just to be sure. If they’re anything like Anne Brokenbrow, you could be in for a big surprise.

What do the singers behind two of last week’s top ten albums have in common with the singer who led one of the most successful tours of 2017-18? They’re all at least 75 years old.