After several recent mass shootings, the United States is again turning to face the problem of gun violence. Americans are regularly shocked and saddened by mass shootings. But changing the country’s gun laws  is incredibly difficult.

Mass Shootings
Different news groups have different definitions of a “mass shooting”. One common definition is “a shooting where four or more people are injured or killed.” By this definition, the US averages more than one mass shooting every day. Only the worst of these shootings make the national or international news.

Last Tuesday, 19 children and two teachers were killed in a shooting at an elementary (primary) school in Uvalde, Texas. On May 10, a man killed 10 people and injured three in a supermarket in Buffalo, New York. Sadly, these are far from the only mass shootings that have happened recently.

There have already been 54 mass shootings in the US this month. In April, there were 66. America isn’t the only country to suffer from mass shootings. But no other country has a history of regular mass shootings like the US.

One of the main causes is the huge number of guns in the country – close to 400 million. America has twice as many guns per person as any other country. For every 100 people in the US, there are about 120 guns.

Many Americans believe that owning guns is an important part of their way of life. That’s partly because the US Constitution says people can “keep and bear arms”. This means people are allowed to have guns.

But not everyone believes that this means “any kind of gun”, or that there shouldn’t be rules for gun owners. A poll taken last year showed that 53% of Americans want more limits on guns. And 90% are in favor of checking the background of people before they can buy a gun.

Guns have changed a lot since that part of the Constitution was written. Back then, assault weapons, which are now popular with US gun owners, didn’t exist. Though weapons have become more powerful and deadly, the Constitution hasn’t changed. It’s a lot harder to change than a regular law.

Many Americans say owning guns is an important part of their way of life. That’s partly because the US Constitution says people are allowed to have guns. But guns have changed a lot since the Constitution was written. Above, a man looks at assault weapons at a recent Texas gun show.

Still, there are ways to limit guns without changing the Constitution. For example, a president can sign special orders. US President Joe Biden did this last April in an effort to limit guns which are hard to track.

The US Congress has the power to create new laws that could help control guns. State lawmakers can also take action. After several big mass shootings, there’s often a lot of talk about gun safety. But usually, attempts at creating new laws don’t get very far.

Political parties  have a lot to do with that. Typically, Democrats are in favor of stricter gun laws. Republicans normally fight against attempts to limit guns. Getting a bill to pass the House and Senate and be signed by the president is a big challenge.

Every mass shooting is a sad and terrifying event. It leaves people shaken and scared. For some people, one way to deal with these feelings is to work to change things. Above, people in Texas protest for gun control.

Every mass shooting is a sad and terrifying event. It leaves people shaken and scared. Talking about those feelings is very important.

For some people, one way to deal with these feelings is to work to change things. Many of the students who survived the 2018 school shooting in Parkland went on to fight for gun control.

It’s too late to avoid the tragedies that have already happened, but there may still be time to prevent the next one.

Note: This article discusses sad and upsetting events. If this news brings up worrying thoughts for you, you should talk about those worries with a parent, teacher, or other adult you trust.

Americans are shocked and stunned following two shootings that have killed nearly 30 people in less than a day. The tragedies are sure to cause more discussion of the high cost of Americans’ love for guns. 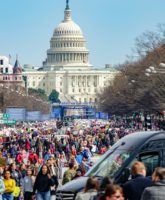