Haze from fires in Southeast Asia is not new, especially between June and October, when many farmers clear their land by burning. But right now, the situation is the worst it’s been since 2015.

There were nearly 12,000 fires in Indonesia last week. That’s around three times as high as the average for this time of year. So far this year, over 1,160 square miles (3,000 square kilometers) have been burned.

Part of the problem is that the weather has been hotter and drier than normal. But the fires are usually set on purpose, since it’s the easiest and cheapest way for farmers to clear land. But these fires often get out of control and set fire to other areas, like rainforests.

Almost half of the fires are in areas covered with peat. Peat is made of lots of layers of dead plants. It forms in wet areas like marshes or bogs, usually over hundreds or thousands of years. Peat can be dried out and burned for fuel.

But when peat burns in the ground, the fires can be very hard to put out. The fires can hide and spread underground, appearing again much later in places where they aren’t expected. When peat burns, it creates a lot of pollution, especially when it’s wet.

Indonesia says it has 9,000 people working to fight the fires. Fire fighters are dropping water from helicopters. The government has even sprayed chemicals in the clouds to try and bring rain. Indonesia has turned down offers of help from Malaysia.

Though the burning is mainly in Indonesia, the smoke also blows over Malaysia and Singapore, causing very unhealthy conditions. Thousands of schools have been closed in Indonesia and Malaysia. In Indonesia, nearly 900,000 people have suffered from breathing problems.

In all three countries, it’s common for people to wear masks when they go outdoors. But masks don’t always filter everything. Much of the pollution is made of tiny particles so small they can’t always be stopped by normal masks.

Though the fires are happening in Asia right now, they will affect the whole world and the future.

To tackle the climate crisis , one of the most important steps is reducing the amount of dangerous gases like carbon dioxide that get released into the air. But fires like the recent ones in Indonesia, Brazil, and other places release massive amounts of carbon dioxide.

The Guardian newspaper reports that fires around the world so far this year have put out more carbon dioxide than the amount put out in a year by the European Union and Japan put together.

In some places in Indonesia, the particles in the air have caused the light to scatter in an unusual way, turning the sky completely red.

Brazilian President Jair Bolsonaro has sent Brazil’s army to try to help bring forest fires in the Amazon rainforest under control. The move comes after weeks of inaction which brought criticism from around the world. 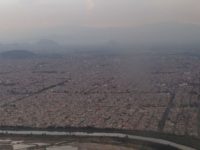 Thailand’s capitol, Bangkok, is struggling to deal with dangerous air pollution. On Wednesday, the city closed over 400 schools for the week and is spraying water to try to clear the air.

New Delhi, India has the worst air pollution in the world. The last two winters have been worse than ever. This year, people in Delhi are hoping things will be better.

Cyclone Batsirai plowed into Madagascar on Saturday, with strong winds and heavy rains. The cyclone left a trail of destruction, and brought serious new problems to Madagascar, which is still struggling after being pounded by Tropical Storm Ana two weeks ago.

If you feel like the weather near you has been pretty bad recently, you’re not alone. Worldwide, many areas have been hit by bad weather like blizzards, flooding, and serious storms. Today NFK takes a look at recent weather challenges around the world.