Two weeks ago, a shocking report came out, giving details of the likely future effects of climate change.  Though serious effects are already visible around the world, the report offered hope that fast action might still bring the crisis under control.

Climate Crisis
The climate crisis is a global emergency caused by the change in weather patterns around the world because of human activity.
The world is getting hotter, mainly because humans are burning “fossil fuels” like coal, oil, and natural gas to make energy. These fuels give off pollution called “greenhouse gases” or “carbon emissions”, which make the climate emergency worse.
The effects of climate change can already be seen: melting glaciers and polar ice, higher temperatures, heat waves, record dry periods, wildfires, record rains, and more strong hurricanes.
Scientists say the world must take strong action right away to avoid the worst effects of the climate emergency.

The United Nations’ IPCC (Intergovernmental Panel on Climate Change) has been releasing reports on climate change since 1990. Part of its sixth report came out on August 9. It’s the work of 234 scientists from 65 countries who collected information from 14,000 scientific papers. This information was combined into a final report 3,949 pages long.

Sadly, the report is just as serious as it is long. The report says that human actions, especially the burning of fossil fuels such as coal, oil, and gas, are directly responsible for the rising temperatures that have caused the climate crisis.

Perhaps the worst piece of news in the IPCC report is that now some of the serious effects of the climate crisis can’t be avoided. Temperatures and sea levels are expected to rise, no matter what. As scientist Michael Mann told CNN, “We have zero years left to avoid dangerous climate change. Because it’s here.”

The most encouraging part of the report is that humans can still decide, through their actions, just how serious climate change will become.

In the 2016 Paris agreement, the countries of the world agreed to cut pollution to try to limit global warming to 1.5º Celsius (C)*. Scientists behind the IPCC report say that this goal can still be reached. But in order to meet the goal, humans must take action immediately, cutting the use of fossil fuels right away.

With rapid cuts in fossil fuel use, and serious efforts to remove carbon from the atmosphere, the rise in the Earth’s temperature could be limited to around 1.5º C. That’s the best possible outcome, and it would take hard work.

The report says that temperatures are rising faster than expected. The IPCC says the Earth has already heated by around 1.1ºC, and is currently on track to reach 1.5ºC by 2030.

If the world doesn’t begin to immediately cut fossil fuel use, it’s likely that the Earth will heat up far higher than 1.5ºC. The report spells out the likely effects of the Earth warmed by 1.5ºC, 2ºC, 3ºC, or more.

But with every small increase in the Earth’s temperature, the extreme weather and the seriousness of these effects will become far more deadly.

A follow-up meeting to the Paris Agreement, known as COP26, is planned for this November in Glasgow, Scotland. At COP26, countries will be expected to officially promise to make bold new cuts in emissions.

Many people are hoping that the IPCC report will encourage world leaders to agree to deep and immediate cuts in fossil fuel use at the COP26 meeting – and then actually follow through on the promises they make.

Did You Know…?
Last week, the United Nations group UNICEF released a report explaining how climate change will affect children around the world. The report found that almost all children on Earth would be affected, and that nearly half the world’s children (around 1 billion children) were already at “extremely high risk” because of the climate crisis. 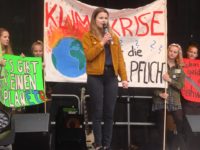 Earth Day is a day set aside to remind people to protect our planet. It’s held on April 22 every year. This Earth Day, US President Joe Biden is holding a virtual meeting on the climate with the leaders of 40 countries.

Last Saturday marked exactly five years since the world’s countries reached a historic agreement in Paris to fight the climate crisis. Though some progress has been made since then, the climate crisis is more serious now than ever before.