On Sunday, China’s government changed the laws so that Xi Jinping can keep being president. Xi Jinping already has a lot of power in China. Some people think he will now be president for the rest of his life.

In the past, China was ruled by one man, Mao Zedong, for a very long time. He did many things to help poor people in China, but later in his life he did many cruel things, too. Some people in China didn’t want this to happen again. So in 1982, China made a rule saying that a person could only be president two times. This is called “term limits”. But now China has taken away the term limits. This means that President Xi Jinping can keep being president for as long as he wants.

In China, there is really only one political party  , the Chinese Communist Party (CCP). There are some other very small parties, but they do not have any power and they are controlled by the CCP. China has a legislature (a group that makes laws) called the National People’s Congress (NPC). But many people call this a “rubber stamp” legislature. This means that they always make any laws that the president wants and don’t ask any questions.

On Sunday, the NPC voted to change China’s constitution (the rules for how the country works). 2,958 people voted for the changes. Only 5 people did not. Now the president doesn’t have to quit. The NPC also changed the constitution to say that Xi Jinping’s ideas are important. Now “Xi Jinping Thought” is part of the rules of China’s government.

Many people inside and outside of China are worried about these changes. Some people are afraid that Xi Jinping has too much power already and that now no one will be able to stop him. Outside of China, some people have put up posters with a picture of Xi Jinping and the words, “Not My President”.

Inside China, it is hard for people to complain. They do not have the freedom to say what they want. People who protest are often put in jail. China also controls the Internet inside the country. They can control what people can search for and see on the Internet. In China it was against the law to protest about the changes. They blocked the words that protestors might use. For example, the word “Disagree” was blocked.

On Monday, 20 Indian soldiers were killed during a fight with Chinese soldiers on the China-India border. Several border conflicts over the last month have raised tensions between the two countries to the highest level since 1967.

Among the more unusual news stories recently…Hong Kong passes a law protecting China’s national anthem, the last person to get a pension from the US Civil War dies, and a sudden landslide in Norway sweeps eight houses into the sea.

On Sunday, protesters in Hong Kong took part in their largest gathering in months in response to new pressure from China. Police broke up the singing, chanting protesters, who had gathered in a shopping mall.

As the new coronavirus disease, COVID-19, crosses the globe, it’s having effects far beyond the illness. The pandemic is having a strong effect on businesses, which is also affecting the climate crisis. 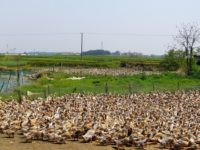 Like many places in Eastern Africa, Pakistan has been suffering from an invasion of locusts since last year. Recently, an unusual plan for helping Pakistan was considered, but dropped – sending in 100,000 ducks to eat the locusts.