Outbreak of Dengue in the Philippines

The government of the Philippines has declared an emergency over an outbreak of dengue. Dengue is a very painful illness spread by mosquitoes. In severe cases, dengue can cause death.

The Philippines has had over 146,000 cases of dengue so far this year – a rate that’s twice as high as last year. Around 662 people have died. Declaring an emergency allows local governments to get money to fight the outbreak.

In 2017, the Philippines began using a vaccine to fight dengue. A vaccine is a special medicine that trains the human body to fight a disease. Sadly, the vaccine made dengue worse for a very small group of people, and the country has stopped using it.

Without a vaccine, the best way to fight the outbreak is to treat the areas where mosquitoes grow and to try to keep people from getting bitten.

Toni Morrison, an award-winning author, has died at the age of 88. Ms. Morrison started out as a book editor, helping polish the work of other authors. But she didn’t like the way black people were shown in many of the books she read.

Ms. Morrison began to write novels that dealt with the lives of black people in a way that felt true and honest. Her books tackled difficult topics, and were both challenging and beautiful. As her work became known, she won praise from around the world.

Ms. Morrison won the Pulitzer prize, the Nobel prize, and many other awards. She will be remembered for the powerful effect her words had on readers and other writers.

In June, a large cruise ship ran into a dock in Venice, Italy, injuring five people. Starting in September, a new law will keep some large cruise ships from going into the city center. Though the law will affect more ships as time goes on, many people believe it still isn’t strong enough.

For years people have complained about the large cruise ships visiting Venice. Venice, sometimes called the “Floating City”, is built on 118 separate islands. Many people worry that the waves from large cruise ships are wearing away the land that keeps the city above water.

Others complain about the huge numbers of tourists who invade the city every year. Only around 55,000 people live in Venice, but in the summer, as many as 60,000 tourists visit daily.

Thailand is facing its worst drought in 10 years. A drought is a long period of time with little or no rain. The drought is drying out the country’s reservoirs – the huge natural and man-made lakes that provide the country’s water.

Twenty years ago, the Pa Sak Jolasid Dam was built, blocking a river near Lopburi. The dam created a huge reservoir and the water completely covered a well-known temple, Wat Nong Bua Yai.

But the drought has now dried out the reservoir. People are able to see, and walk to Wat Nong Bua Yai again. Many people are now visiting the temple every day to pray, leave offerings, and take pictures.

India Struggles With a Water Emergency 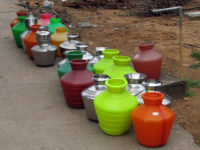 Hundreds of millions of people in India are facing a water shortage. The city of Chennai has a water emergency, and the situation is bad in many other parts of the country.

Venice Has Too Many Tourists

Venice is a city that’s built around water. But the people who live in Venice say that now they’re being flooded – not by water, but by tourists.