A Global Climate Strike is planned for this Friday, September 20. The youth-led climate strike movement has encouraged adults to join them this time, and leaders expect the strike to be far larger than earlier strikes.

Swedish teen Greta Thunberg began the climate strike movement in the summer of 2018 by skipping school to sit outside Parliament, protesting her government’s lack of action on global warming.

Since she started, millions have joined in similar protests around the world. The strikes are usually held on Fridays, leading to the name, “Fridays for Future”. Two worldwide climate strikes, in March and May, were attended by millions of people in thousands of cities and towns around the world.

In the past, most of the protesters have been young people, worried because climate change will affect them much more than adults. Friday’s protest is the first time adults have been specifically encouraged to join the strike.

Adults are becoming more worried about the climate crisis, even in places like the US, where a recent study showed that 64% say climate change is a “serious problem” or worse. This is partly because of the severe weather events of the last few years.

Though most of the student leaders have been very well-informed about the climate crisis, it has been easy for critics to use the youth of the strikers as a reason not to listen to them. Having large numbers of adults join the protest may change that.

Scientists could also help the protesters get taken more seriously. Over 3,000 scientists have signed a letter saying that they agree with the students.

There will certainly be more people involved in the strike with adults included. Many large unions (groups that represent workers) have joined the protest. For example, the International Trade Union Confederation (ITUC), which has over 200 million members, is supporting the strike.

Some companies, such as Patagonia, are closing down for the day so their workers can strike. Over 1,000 other companies are using their web sites to hold a “digital climate strike” in support of the movement.

Another way adults are helping is by making it easier for students to protest. Many parents, teachers, and schools are encouraging their students to participate. In New York City, students will be excused for being absent if they are striking with their parents’ permission.

In New York City, students will be excused for being absent if they are striking with their parents’ permission. Alexandria Villaseñor, a long-time climate striker in the US, made this post on the social media site Twitter.

WEEK 40 of our @UN #ClimateStrike in NYC! We have one week to go until the #GlobalClimateStrike, our absences that day will be excused (thanks @NYCSchools!) and we are so excited. Next Friday #StrikeWithUs, and let's change the world together ❤ pic.twitter.com/HJJzIeXFKc

Friday’s strike is expected to be huge. The protest comes just days before a United Nations (UN) meeting on climate action on September 23. The organizers report that over 3,500 protests in 117 countries have been planned.

To make the impact of the strike as large as possible, the organizers plan to follow up with more climate action events all week long.

Ms. Thunberg, who sailed to the US in order to speak at the UN meeting, will be in the US for the protests. She has had a busy schedule of interviews since arriving in New York. She will speak to the US Congress on Wednesday. Last Friday, she joined a climate strike in front of the White House. 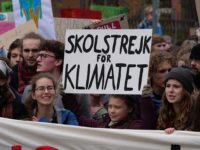