Starting March 1, people in Luxembourg no longer have to pay to ride public transportation. The country has made all of its trains, buses, and trams free to ride, in an effort to cut down on traffic and pollution.

Luxembourg is located between Belgium, France, and Germany. It’s one of the smallest countries in the world – less than 1,000 square miles (2,586 square kilometers) in area. In spite of its small size, Luxembourg is one of three capitals of the European Union and it’s home to the European Court of Justice – the highest court in Europe.

Several cities around the world have experimented with free transportation before, but Luxembourg is the first country to give riders a free pass.

Luxembourg only has about 600,000 people – fewer than most large cities. But the country has a big traffic problem. Around 200,000 people come into Luxembourg from the countries around it every day for work.

The problem is worst in the capital, Luxembourg City. Only 110,000 people live there, but about 400,000 more come to work there every day.

During rush hours – when traffic is heaviest as people drive to or from work – the roads are often jammed. Some trips that should normally take 30 minutes can take an hour or longer.

The government of Luxembourg hopes that by making transportation free, many more people will start taking buses, trains, and trams instead of driving. This would cut down on traffic and help Luxembourg pollute less.

The government also wants to make it easier for poor people to get around. Before the free system, a single ride cost about $2.20 (€2), and a yearly pass cost $485 (€440). The new law only affects regular seating. Riders who want to go first class must still pay.

Not everyone thinks that making public transportation free will solve Luxembourg’s problems. For one thing, people in Luxembourg really like their cars. The country has 662 cars for every 1,000 people. The average in the European Union is just 468 cars for 1,000 people.

Some people believe that the country’s transportation system simply isn’t ready for huge numbers of new riders. They worry that without more money coming in from riders, it could be difficult for the country to improve its system.

The government’s plans call for spending $4.3 billion (€3.9 billion) between 2018 and 2028 to improve its train system. The country also plans to make its bus system better, and make it easier for people from other countries to park their cars and catch a ride into the country. 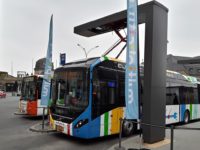 In today’s news roundup, more huge protests are held in the Russian city of Khabarovsk, Somalia’s prime minister has been removed by parliament, and Qantas Airlines’s last 747 draws a kangaroo in the sky as it leaves the country.

Among the more unusual news stories recently…Prague holds an outdoor dinner at a 550 yard (500 meter) table, a contest app keeps players’ fingers glued to their screens for days, and a Berlin transportation company wants smelly riders.

After days of heavy rains, high waters have caused two dams to collapse in central Michigan. The waters released by the dams have flooded Midland, and forced around 11,000 people to leave their homes.

Early Thursday morning, a deadly gas leak from a chemical factory in Visakhapatnam, India spread over a sleeping neighborhood, killing several and sending hundreds more to the hospital.